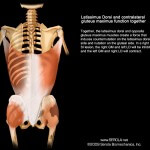 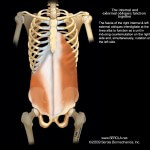 Counternutation on the External Oblique & Latissimus Dorsi side

The fascia of the right IO and left EO interdigitate at the linea alba to create a force couple that induces counternutation on the IO side and nutation on the EO side.

The coordinated movement between these two muscle slings is consistent with Gracovetsky’s [1] analysis of muscular patterns in shoulder counter rotation occurring during gait. When the left leg is in extension (pelvis rotating to the left with left GM contracted), the left shoulder would rotate to the right. Muscle involvement would include, on the right, a tight trapezius and posterior deltoid but inhibited pectoralis major, anterior deltoid and anterior serratus, while on the left it would include a tight pectoralis major, anterior deltoid and anterior serratus, but inhibited trapezius and posterior deltoid.

Gracovetsky [2] describes the coupled action of the latissimus dorsi, through the lumbodorsal fascia to the gluteus maximus, as a key component of energy transfer in gait. A lateral bending movement in the spine is converted into axial torque that drives pelvic rotation. Through this mechanism, energy is transmitted between the upper extremities and legs.

In a normal sacroiliac joint, combining Color Doppler Imaging with oscillation, Wingerden [3] showed that the gluteus maximus, along with the erector spinae and the biceps femoris, produced a significant increase in sacroiliac joint stiffness, along with a lesser, but similar, effect from the contralateral latissimus dorsi. We can assume that these muscles produced a nutation effect on the gluteal side since, during nutation, the joint surfaces approach each other as the interosseous ligament winds tighter and the normal joint becomes stiffer and more stable.

Right Sacroiliac Nutation Lesion
In a right nutation lesion, the actions of the right counternutation muscles become intensified while those of the right nutation muscles become inhibited; thus, the left GM and right LD will tighten and the right GM and left LD will be inhibited. This force couple induces nutation on the left, as demonstrated by decreasing tension in the left long dorsal sacroiliac ligament [4, 5]. At the same time, it would induce counternutation on the right.

At the level of L4 to L5, the lumbodorsal fascia is not connected to either the spine or ligaments. Instead, these free fibers mesh with fibers of the latissimus dorsi and superior division of the contralateral gluteus maximus to provide a coupling action [3, 6, 7] [8]p129. Proponents of the keystone concept believe that this force couple can assist in sacroiliac joint stability by providing a force that is relatively perpendicular to the joint surface. Because these muscles are inhibited in a sacroiliac injury, they assumed that dysfunction in the muscles preceded sacroiliac joint instability; however, they offer no explanation of how the muscles became dysfunctional. On the other hand, the Serola Musculoskeletal Integration Theory, being based on the ligamento-muscular reflex, states that sacroiliac ligament injury precedes muscle dysfunction (see Mechanisms of Injury and Muscular Adaptations).

All of the shoulder muscles mentioned above would also be involved in a similar manner, depending on their action of promoting nutation or counternutation relative to the lesioned or normal (or less lesioned) side. The muscles that rotate the shoulder to the right would be chronically contracted, while the same muscles on their contralateral side would be chronically inhibited.

Over time, depending on the degree of SIJ ligament injury and the length of time the compensation pattern has been developing, the muscles that promote ipsilateral counternutation will become tighter and overpower the inhibited muscles that promote ipsilateral nutation. This chronic contraction/inhibition pattern would lead to postural distortions and coordination difficulties that may be expressed by delayed timing and reduced balance and performance throughout the body.

However, with a different interpretation of the results, it appears that what actually happened does fit into the model of the nutation lesion. The compensating pattern of counternutation should have caused anterior pelvic tilt, facet jamming at L4 to S1, and narrowing of the lateral canals. The narrowed canals most likely led to compressive irritation of the inferior gluteal nerve (L5 to S2), which most likely caused gluteus maximus hyperactivity. Left trunk rotation increased the right lumbar lordosis [2], further narrowing the lateral canals and increasing pressure on the nerve roots. The opposite latissimus dorsi wasn’t involved because it is fed by the thoracodorsal nerve from C6 to C8. Since this is a right SIJ injury, the left latissimus dorsi was hypotonic, as the right gluteus maximus would have been if not for the extra complication of irritation to the nerve roots.

Their study showed that exercise to both muscles increased tone to the latissimus dorsi and decreased tone to the gluteus maximus; this is the clue that leads to understanding the apparent incongruity. It appears that the superior division of the gluteus maximus, being a pelvic extensor, when strengthened, eventually created enough posterior rotation of the pelvis that it was able to decrease the acute angulation at the lumbosacral area and decompress the lateral canals. The pressure on the inferior gluteal nerve was removed and normal tone, or even hypotonia (because the right sacroiliac joint was in lesion), was restored to the right gluteus maximus. Although, post-exercise, left torso rotation increased lordosis, as it did pre-exercise, the lateral canals may have opened enough to allow the lordosis to occur without pressing on the nerve roots. This is good example of a compensation-to-compensation pattern. Having a good understanding of the underlying patterns can greatly assist one in finding and fixing the problem.

Coordinated Rotation of the Trunk
In normal movement, during right weight-bearing, the right internal oblique and left external oblique pull the left rib cage down and forward, while the right latissimus dorsi and left gluteus maximus pull the right shoulder down and backward. Normally, these patterns reverse during left weight-bearing. However, with a right sacroiliac nutation lesion, the movement is magnified and becomes chronic as these muscles remain in a state of tension to remove stress from the sprained ligaments on the right side. A counternutation compensation pattern develops in the structure as the spine laterally flexes and rotates to the right. If it ended there, the person would remain twisted to the right and bent forward. However, proprioceptive responses would come into play as the person unconsciously attempts to stand erect. Righting reflexes would cause the upper trunk to counter-rotate to align the shoulders with the pelvis and bring C2 in line with S2. This secondary compensation pattern will, in turn, twist the upper spine to the left, while the lower spine is twisted to the right. With chronicity, the mixing of these two patterns will lead to other adaptations and eventual structural stresses throughout the body. Please see my section on Overcompensation Pattern – Structural Adaptations for more examples.

A good understanding of the interplay between nutation and counternutation, in both normal movement and compensation to injury, will give the observer a superior method of treating the musculoskeletal system as a functioning whole.