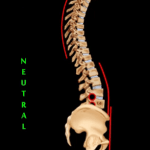 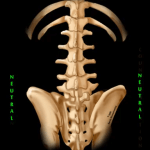 Unless specifically mentioned, we will consider the compensatory reactions of the musculoskeletal system to the right nutation lesion throughout this website.

Please note that I use the word “lesion” interchangeably with the word “injury.”

The cardinal planes are designed to give an observer an objective idea of how a person or object moves but, subjectively, the human body moves relative to itself.

In a normal spine, nutation and counternutation reciprocate from side to side evenly in timing and relative range of motion. However, with a Nutation Lesion, the chronic patient may appear in a state of over-compensation in which the body remains in some degree of counternutation on the injured side, depending on the severity of the injury and the length of time in compensation (see Muscle-Ligament Role in Joint Tension).

Since hip flexion is associated with counternutation, the Anterior Superior (A/S) side of the pelvis is a strong indication of which side is the Nutation Lesion, or the major if both sides are in the lesion, which is common.

The posterior view will show the anterior rotation of the right ilium (A/S), with the posterior rotation of the left ilium (P/I). The direction of the pelvis is considered to be the primary movement but, within the pelvis, the sacrum moves counter to the innominates and, therefore, counter to the primary movement. Therefore, the pelvis will rotate to the left, and carry the entire trunk to the left, on a global basis but, relative to the pelvis, the spine will rotate and laterally flex to the right, with two vertebrae as exceptions; L4 and L5 will rotate and laterally flex to the left due to their ties to the ilium by the iliolumbar ligaments, and the action of some fibers from parts of the psoas, multifidus, and lumbar parts of the longissimus and iliocostalis [1-3]. Although the sacrum laterally flexes to the left to form the bottom part of the lateral C – curve, it rotates to the right. The sacral base will move posteriorly and superiorly on the right, and the sacral apex will move to the right. In this manner, counter-rotation occurs at L5-S1 and L3-L4.

The lateral view will show anterior tilt of the pelvis (hip flexion), but with straightening of the lumbar spine superior to L3, producing an increased lumbosacral lordosis. The transitional area from L3 to S1 may become compressed posteriorly, leading to the possibility of facet syndrome, posterior disc compression, lateral canal stenosis with nerve root impingement, spondylolisthesis, anterior thoracic vertebrae (straight back syndrome) and lumbosacral hypomobility (see below).

The articular processes of the lower thoracic/upper lumbar vertebrae will be prominently posterior on the side of the lesion, while those of the upper thoracic vertebrae will be prominently posterior on the contralateral side. This upper thoracic “rib hump” will force the scapula to ride improperly and, in some cases, cause misalignments of the scapuloclavicular and sternoclavicular joints, which may have some bearing on thoracic outlet syndrome and cervical biomechanics.

Because the sacroiliac ligaments strongly influence the tone of all the muscles that attach to the sacrum or innominates, which include most of the muscles from the head to the knees, the majority of our musculoskeletal system is directly regulated by the sacroiliac joint. Once injured, ligaments heal poorly, if at all; instead, the body adapts in a long term process that slowly spreads throughout the musculoskeletal system (see Chronicity Factors).

Importantly, the imbalance that occurs between the tight counternutation and inhibited nutation muscles on the involved side is magnified by the imbalance between the side of the lesion and the “normal” or less injured side of the body. This disparity can lead to rotational and side-bending compensation patterns throughout the structure. The counternutating muscles contract about 23,000 times a day against gravity (considering respiration and gait) in their effort to rotate the sacrum and ilia toward each other (see Influences on SIJ Movement).

From the time of injury on, any twisting of the spine, or any axially directed force, upwards through the legs or downwards through the spine, which causes anything more than a few degrees of movement in flexion, extension, or rotation at the sacroiliac joint, will aggravate the injured ligaments and further increase muscle tension or wasting [4]. The cumulative effects may take decades to be expressed symptomatically.

As the situation becomes chronic, the counternutation muscles create a pattern within the musculoskeletal system that may cause more problems than the actual lesion and is often seen as the chief cause of the patient’s complaints.

The Serola Theory suggests that the Sacroiliac Nutation Lesion may be the initial step in developing common pelvic and spinal misalignments which are seen in clinical practice in almost every patient.

Compensation to Compensation
As the injury progresses, other complicating factors, such as compensation-to-compensation patterns may be found due to the muscles pulling the joints past neutral, into subluxation. For example, the counternutating force may be great enough, over time, to subluxate the sacrum posteriorly in relation to the ilium, creating a secondary counternutation lesion (see Counternutation Lesion). A different aspect of over-compensation is explained in the section on the latissimus dorsi/contralateral gluteus maximus pairing (see Gluteus Maximus – Latissimus Dorsi Muscle Sling) . Lumbar disc herniation may cause reversal of the lumbosacral hyperlordosis. Anterior pelvic tilt may cause hip degeneration, which may result in posterior pelvic tilt. Many other patterns may originate as overcompensations to the Nutation Lesion.

Postulate
The Serola Theory proposes that most musculoskeletal dysfunctions can be traced to the sacroiliac nutation lesion. Once understood, the simplicity of the underlying nutation and counternutation patterns makes complex dysfunctional syndromes more tenable. The roles of more muscles, and their effects on structural distortions, can be recognized within this unifying pattern.

It is reasonable to assume that the sacroiliac nutation lesion is a pervasive part of the human condition. Additionally, common structural and muscular dysfunctional patterns described in this article demonstrate the universality of the sacroiliac nutation lesion. When one considers that an estimated 80% of the population will experience back pain sometime in their lives, as suggested by Berquist-Ullman [11] Kelsey [12] and Panjabi [13], with mostly temporary resolution, serious consideration should be given to this simple biomechanical approach because it offers a unifying way to tie the entire musculoskeletal system together, based on innate movement patterns of nutation and counternutation.

Research Goal
While, at this point, the relationships of these conditions to the Sacroiliac Nutation Lesion are based mainly on literature reviews, clinical observations, and an understanding of the dynamics of nutation and counternutation, my goal is for more research to advance our understanding of the integration of our musculoskeletal system (see Future Research).