Appreciating the Functions of the Sacroiliac Joints 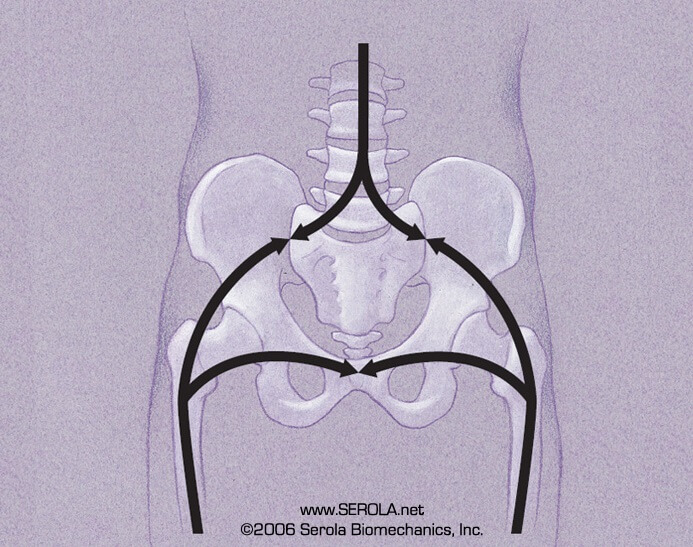 Appreciating the Functions of the Sacroiliac Joints

The sacroiliac joints (SIJ) are underappreciated. Although the SIJs are the core structure of the musculoskeletal system, they remain the least understood joints in the body. Here is an overview of the intricate ways in which they function:

3) Shock Absorption
The sacroiliac joint is at the center of the body’s shock absorption system. When force is transmitted superiorly or inferiorly through the body, a spring like action takes place. Below the sacrum, the feet pronate, the fibulae move inferiorly [1], and the knees twist as the tibia goes farther into internal rotation than the femur. As the innominate rotates posteriorly, the sacrum rotates anteriorly. At the sacroiliac joint, this movement winds the interosseous ligament, drawing the sacrum and ilium closer [2] [3]p55, but not together [4]. Above the sacrum, the lumbar curve increases like a compressing spring. The sacroiliac joint is forced into nutation. Once the energy is absorbed and the end of range of motion is reached, the body reacts by going into counternutation, and all the above actions are reversed as the spring rebounds.
For more see Shock Absorption

Wilder et al. [5] was of the opinion that the sacroiliac ligaments may absorb energy and function in shock absorption. Grieve [6] stated that, if the sacroiliac joint does act as a central shock absorber, as suggested by Wilder, then, with sacroiliac joint dysfunction, degeneration of the lumbar spine and ipsilateral hip would be inevitable, which is endemic in our general population.

4) Sensors
The sacroiliac joints serve as proprioceptive balance centers which control and orient the body’s posture through muscle contraction and inhibition patterns. Snijders [7] stated that “The SI joint can be compared to a multidirectional force transducer, for it can be expected that the ligaments surrounding the SI joints possess mechanoreceptors. In that case, the SI joints can be assumed to be large sensors located in the middle of considerable force streams being transferred by the pelvis from the upper part of the body to the legs. In this transfer the largest muscles of the body are involved.” Panjabi[8] goes further by stating that injury to the ligaments may provide corrupted signals to muscles, thereby altering structural positioning.

5) Gait
The sacroiliac joints enable the sacrum to function as a hub, suspended between the ilia by ligaments [9]. Bipedal motion is transferred from the legs, through the pelvic bones, to the sacrum, spine, cranium, and extremities in a unilateral, reciprocating fashion.

6) Birth Process
Movements of the sacroiliac and pubic joints allow spreading of the pelvis to accommodate the birth process. To accomplish this, the pelvis goes into nutation. Posterior displacement of the sacral apex increases the pelvic outlet [10]p64-67.

Did this article interest you? Read even more articles like this one by going to our main Blog Page. Do you have any suggestions for topics or something you would like to have Dr. Serola elaborate on? Contact us anytime or leave us a comment below.