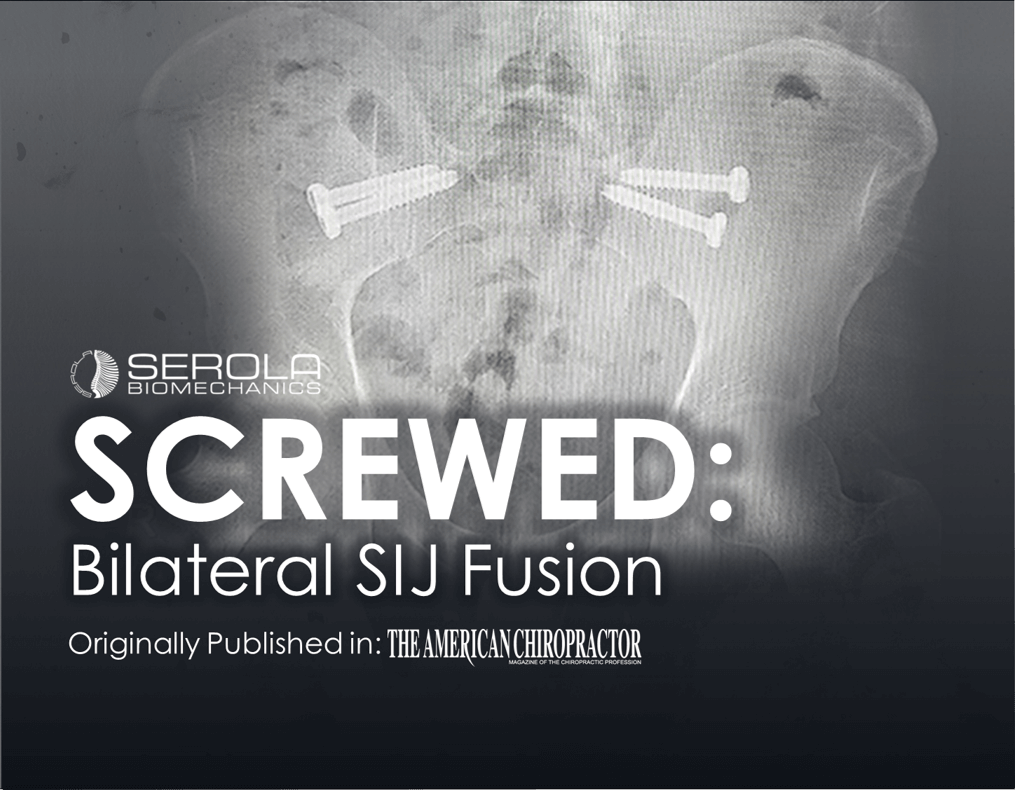 Hilton’s Law[1] forms the basis of the relationship between the structural elements of our musculoskeletal system; it states that the nerve supplying a joint also supplies both the muscles that move the joint and the skin covering the articular insertion of those muscles. The innervated parts of joints consist mainly of three ligamentous structures; the ligaments that hold the joints together, the capsule that encases the joint, and the synovium which allows smooth movement. As the pelvis moves, the ligaments within the two SIJs and pubic symphysis act to both regulate the muscles to ensure smooth coordinated action, and to stop movement at the end of range of motion. It is a dance of interdependent parts: ligaments, muscles, and skin.

Almost all the muscles from the head to the knees directly attach to the pelvis; these are the muscles that move the SIJ, so their relationship to the SI ligaments is governed by Hilton’s Law. By recognizing this principle, we can appreciate the reciprocity between the vast mass of SIJ ligaments and the corresponding mass of muscles they directly regulate. Although the exact relationship of which muscle corresponds with which ligament is undetermined, it is established that there is some direct interconnection between the capsule and the multifidus muscle, and the ventral area of the joint with the gluteus maximus and quadratus lumborum muscles[2]. Further, it is known that the more ligaments involved in an action, the greater the muscular response[3]. Considering the relationship between the vast mass of sacroiliac ligaments and the vast number of muscles that attach to the pelvis, and therefore move the SIJ, it is reasonable to say that when the SI ligaments are sprained, almost the entire muscular system is directly involved. 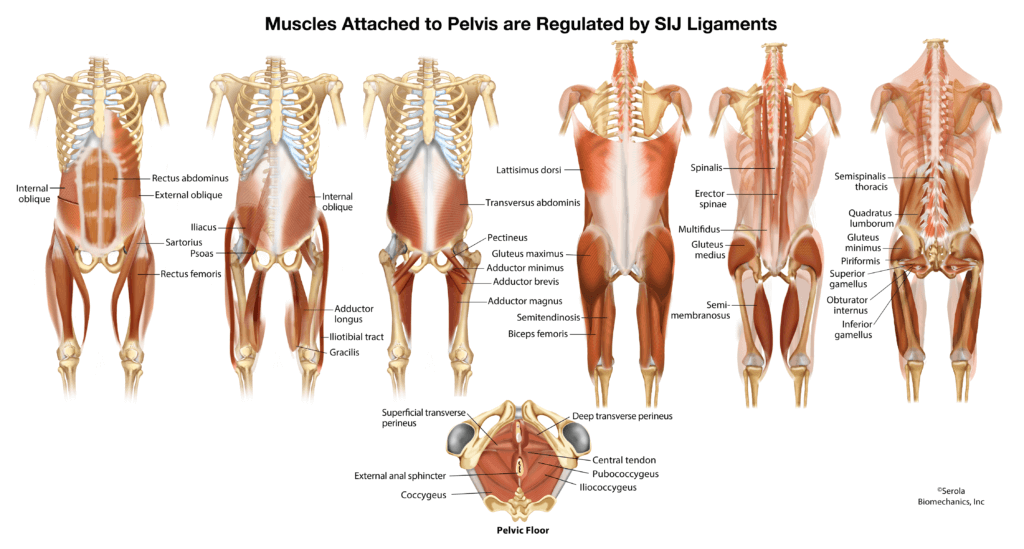 Poor pelvic alignment is usually due to some trauma to the ligaments; they cause the muscles to move the pelvis (actually, the entire structure) in a pattern that avoids putting further stress on the injured ligaments[4], which changes movement patterns, and alters pelvic alignment.

Because the SIJ injury is usually in Nutation, the muscular response is usually Counternutation, so we can predict the pattern of muscular involvement and estimate the resulting joint or muscle attachment stresses. When the SIJ is traumatized by fusion surgery, the patterns are no longer predictable because the injury itself is changed drastically. One trauma is substituted for another.

The SI Joint is the Core of a Complex Kinematic Chain

The importance of the SI joint is not in how much it moves, but in how much it regulates the rest of the body. It is the core; everything above and below is directly affected by its action. Each ligament has very sensitive proprioceptive nerves within it, which sense speed, direction, and acceleration of the structures around it, and then correlates with the spinal cord, brain, muscles, and other ligaments to synchronize movement throughout the body. Individual ligaments are part of the brain’s communication system. Like the brain, little motion is needed for understanding and acting upon the information. There is almost undetectable motion in the brain, yet it regulates the entire body.

During screw implantation, ligaments are cut, torn, and disrupted and their proprioceptive signals, which regulate the action of the muscles, can no longer function normally. How the muscles move the pelvis and legs can vary by the position and direction of the screws, the eventual relative position of the pelvis, and the need for synchronous movement throughout the body, which may be compounded by nociceptive input for injury avoidance. As a result, for example, the fit of the leg bone into the pelvis at the acetabulum will most likely be altered. The motion of the hips will no longer be smooth, and various, unpredictable contraction/inhibition patterns may occur between the legs and trunk muscles.

In a perfect world, movement from the foot to the head is passed from joint to joint smoothly. As one steps forward, the leg, trunk, shoulder, arm, neck, and cranium each move synchronously. Each joint in the chain has its respective range of motion. If two vertebrae are fused, the ones above and below become a little more hypermobile; the hypermobility is passed up and down the structure, lessening as the action goes farther from the fusion. This is done to allow synchronous movement throughout the body as much as possible.

The sacrum moves in a pivoting motion. On the side of weight-bearing, the sacrum moves forward, down, and rotates to the opposite side (nutation). We can see this same movement pattern in each vertebra above the sacrum, as they all form an interdependent shock absorption system. In the spine, we know the sacral movements of nutation and counternutation as flexion, extension, and rotation; different names, same motion. As the right side of the sacrum pivots in one direction, the left side pivots in the opposite direction. The ilia move in reciprocal fashion.

When one SIJ is stuck, or worse yet fused, the opposite SIJ takes up some of the movement and may swing in a larger arc, kind of like what happens when one foot is injured; one limps. But, when both SIJs are fused, the motion may become significantly more stilted as other joints, such as the hip and spine, and their attached muscles, have to generate or absorb erratic forces for which the structure is not designed. This mechanical loss of pivoting sacral motion, combined with a significant loss of ligamental influence on the substantial bulk of the muscular system, may create unpredictable stresses and hypermobility, leading to degeneration in other parts of the body. Due to the remarkable adaptability of the human body, it may take years for the altered patterns to express as pain, but the dysfunction is there immediately after fusion. To think that we can just screw a joint together and neglect the ligaments, especially the SI joint, is to reduce the complexity of the musculoskeletal system to an untenably simplistic model.

Direct evidence, such as comparatively testing muscle function in a normal and fixed SIJ is not available with the SIJ; however, the associations have been made with other joints. Unfortunately, the current understanding of biomechanics of the SIJ goes off in many directions, often leading to half-truths, tangents and dead ends. To most doctors and therapists, back pain remains a mystery, which often leads to incorrect care. The answers are based on common sense, but they just do not come to mind for people who are looking elsewhere. The solution is simple to understand once we look in the right direction. The Musculoskeletal Integration Theory is the only concept that ties the musculoskeletal system into a functioning whole. So, you have to read more to understand more, but it is available for you to read. The cure is to heal the ligaments, which is relatively easy if the doctor knows what they are doing, and the patient cooperates. However, it takes a different mindset to accept and act on this new paradigm. One key is patience. But, once understood, it is easily incorporated into almost any technique.