Tensegrity: The Interplay Between Muscles and Ligaments 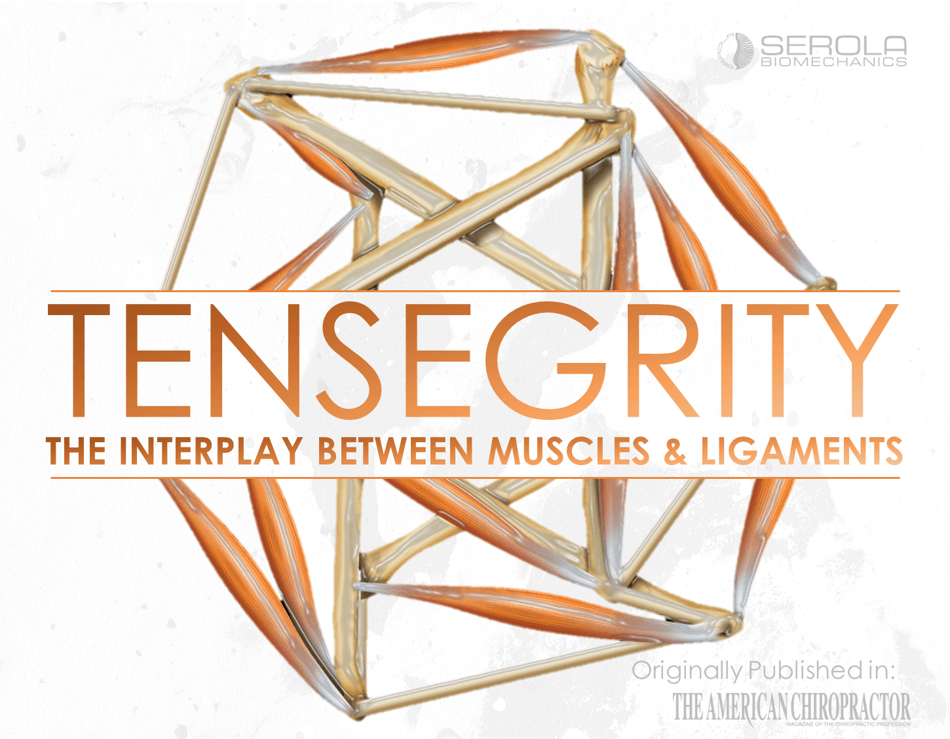 To understand how our musculoskeletal system functions, it is important to understand the interplay between soft tissues, such as the ligaments and muscles, and the body’s structural elements, the bones. This relationship is expressed through a principle called tensegrity (Tensional Integrity).

Tensegrity is based on a principle discovered by one of Buckminster Fuller’s students, Kenneth Snelson, who named it “floating compression.” It may be described as a triangulated structure composed of stick-like struts (compression elements) bound by cables (tension elements) in which the struts are not touching. The unit is pre-stressed by the cable portions and held in secure balance throughout its triangulated architecture. Simply put, it is composed of sticks suspended in a tight web in which the sticks do not touch each other.

The pre-stressed structure distributes tension throughout itself evenly, suspending the compression units in a web of tension such that stress applied at one point is distributed uniformly, and instantly, throughout the structure. There are no lever arms or fulcrums. Tensegrity has been described as continuous tension with discontinuous compression [1]. A tensegrity structure is strong, flexible, lightweight, energy efficient, stable in any direction, and independent of gravity. It does not depend on the strength of individual elements for stability; instead, it gets its strength by distributing the stress evenly throughout the entire structure, even on opposite sides [2, 3].

Levin [2, 4, 5] applied the principles of tensegrity to the body and named it Biotensegrity. He stated that the bones are compression elements floating in an integrated tension network of soft tissues, including ligaments, muscles, and connective tissue.

Levin [2] describes the suspension of the sacrum within three-dimensional space by comparing it to the hub of a wheel suspended by spokes. He stated “the sacrum is viewed as the hub of a tension network: the model provides for stability of the sacrum when it is loaded from any direction and can be used during bipedal or quadrupedal standing and walking or even standing on one’s head…in contrast to the keystone and similar models. Since the system requires low energy, it is favored by nature.” In this model, all of the supporting elements must be tensioned equally to maintain stability, in accordance with the principles of tensegrity, as described by Buckminster Fuller [1].

As the wheel rotates, the load is distributed among all of the spokes that attach to the hub, resulting in equal tension on all spokes. However, weight transfer in the sacroiliac joint, instead of occurring on a rotating hub, alternates from side to side, and occurs on the side of the sacrum that is in nutation. The ligaments that restrict nutation carry the load, and those that restrict counternutation will be lax; these relationships reverse on the non-weightbearing side.

In the body, all joints must remain free and mobile to maintain tensional integrity. Subluxations disrupt muscular and ligamentous reciprocal movement patterns and destabilize the entire structure, not just the immediate area.

For example, as our structural core, the sacrum moves together with the innominates such that equal tension is continuously distributed throughout the structure by the sacroiliac ligaments and all muscles that attach to the sacrum and/or innominates. The sacrum nods anteriorly in coordination with the posterior movement of the ipsilateral ilium. At the same time, in order for tension to be maintained in the contralateral elements (ligaments, fascia, and muscles), the contralateral side of the sacrum rotates posteriorly while the ilium rotates anteriorly.

For any joint to move smoothly, the muscles on one side must undergo concentric contraction while their ipsilateral antagonists undergo eccentric contraction; this is true whether it is flexion/extension of the elbow, right/left lateral flexion of the spine, or nutation/counternutation of the sacrum. I am simply extending the role of agonist/antagonist muscle relationships to include the ligaments, as described in the arthrokinetic reflex [7] in a normal joint and the ligamento-muscular reflex [8] in an injured joint. Vleeming [9] establishes a similar relationship between the long posterior ligament and nutation/counternutation. He stated that “The present study shows that nutation of the SI-joint induces relaxation of the long ligament whereas counternutation increases tension. This is in contrast to the effect on the sacrotuberous ligament: nutation leads to increase of tension, counternutation to relaxation. Increased tension in the sacrotuberous ligament during nutation can be due to sacroiliac movement itself as well as to increased tension in the biceps femoris and/or gluteus maximus.”

A Small but Significant Step

What I am adding to Tensegrity is that this mechanism maintains tension in the SI joint (the core functional unit of the musculoskeletal system) due to the reciprocating roles of the muscles and ligaments, both on the same side, and on the opposite side. As such, it is a small but significant step in demonstrating how tensegrity integrates with the arthrokinetic and ligamento-muscular reflexes to maintain homeostatic tension throughout the musculoskeletal system.

During nutation, ligaments that restrict nutation become tight and those that restrict counternutation become lax. When the ligaments become lax, the supporting muscles tighten. For example, as the sacrum goes into right nutation in figure 1, the sacral apex moves away from the right ischial spine, the right sacrospinous ligament is tensed, and the right piriformis slackens and lengthens via eccentric contraction. On the left side, the sacrum goes into counternutation. Figure 2 shows the opposing movement. As the apex moves toward the right ischial spine, the right sacrospinous ligament slackens, and the right piriformis undergoes concentric contraction to take up the slack and maintain tension in the joint. Keeping with the principles of tensegrity, continuous tension is maintained by the alternating roles of the ligaments and muscles during the reciprocating phases of nutation and counternutation. Consequently, if the right sacrospinous ligament sprains, the right piriformis is available to assume greater responsibility for stability by maintaining tension throughout the nutation phase as well as its normal function of maintaining tension during counternutation and, for that reason, will be in a continuous state of concentric contraction as long as the ligament(s) is insufficient.

The greater number of ligaments involved, the greater the muscular response, even at lower forces [10]. Considering that the sacroiliac joint is supported by a vast network of ligaments and muscles, it is reasonable to assume that a sprain of these ligaments will cause considerable muscular reaction. Due to poor blood supply and biomechanical factors, the ligaments may never completely heal; thus, muscular tension may pull the sacrum into a constant state of counternutation on the side of the nutation lesion. I propose that this lesion to the core structure, maintained indefinitely, can lead to compensation patterns that may play a key role in many musculoskeletal injuries.