The Fallacies of the Keystone Form and Force Closure Concept 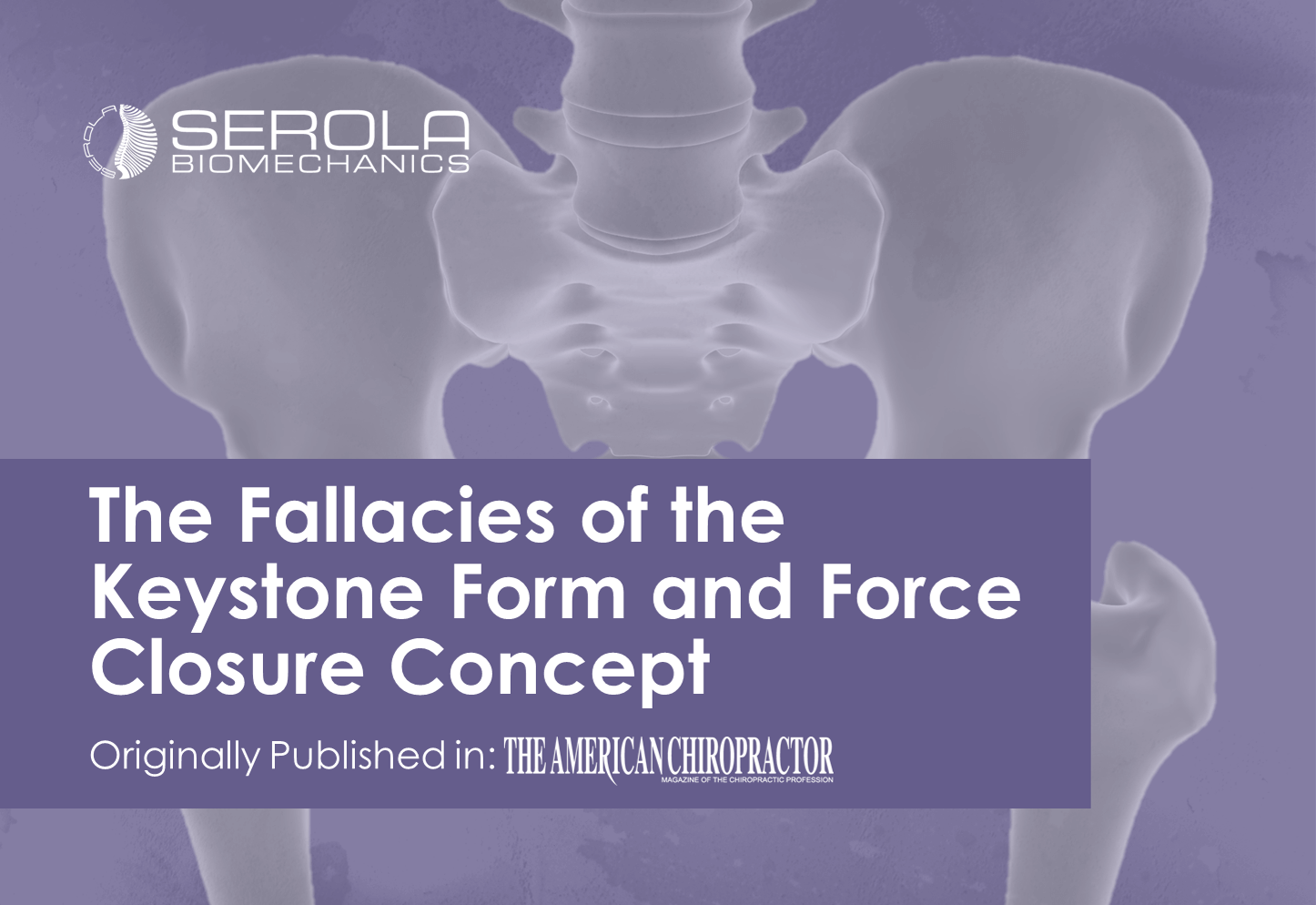 Over the past 30 years, I have researched the literature on the sacroiliac joint (SIJ) and matched it to what I found in my patients. In the early 1990s, the keystone concept of form and force closure was introduced by a group of physiotherapists in Europe[1]. They came upon an idea after finding that “A commercial device used in painting ceilings helped us to conceive the concept of the SIJ functioning as a friction joint. This was, of course, scientific heresy since the main characteristic of a joint is its capacity to function smoothly.” They continued “Twelve years later, there is ample evidence for the view that the SIJs function as a friction joint.” Now, another three decades have passed, and the concept of the SIJ as a keystone is well-integrated into our misunderstanding of SIJ mechanics. They were correct, it was, and remains scientific heresy.

The Concept
A keystone is believed to exhibit self-locking through form and force closure[2]. Form closure is defined as the fit of the wedge-shaped sacrum between the ilia. Force closure is defined as the compressive force of muscles and ligaments on the SIJ articular area between the sacrum and ilia. The concept is based on the idea that, during weight bearing, the sacrum moves deep into the ilia and the sacral and iliac joints are compressed together at the articular region to form a stable link in which force is transmitted directly from “bone-to-bone.”

Biomechanically, in normal reciprocal movement, as one ilium moves medially, the other moves laterally and, in the rare movement of bilateral nutation, when both ilia move medially, the sacrum moves anteriorly and inferiorly, away from the ilia. In other words, approximation of the ilia does not mean approximation of the sacrum and ilia. Moreover, the ilia can be approximated but cannot be compressed because of the space that the sacrum takes between them. To be clear, the pelvis functions like a hammock, not a keystone.

The Science
In the only scientific study that looked at approximation of the SIJ surfaces, Vukicevic [4] found that, when considering the sacrum and ilium, “tight contact between the articular surfaces is never reached in a wide range of the applied loads, secured by strong sacroiliac interosseous ligaments.” But, “removal of the interosseous ligaments caused the sacrum to drop and fix between the ilia, having a profound effect on sacroiliac movement.”

With a sprain that is less than a complete avulsion, we would expect the sacrum to drop and move in an aberrant pattern, which a common dysfunction known to physical therapists as an upslip lesion. Because the sacrum and ilium ride so close to each other, one would expect them to wobble and rub at irregular angles. The aberrant motion would provide an alternately compressive, shearing, and rotary force to the SIJ surfaces, roughen the surfaces, and lead to degenerative changes, especially at the periphery of the joint, where the greatest degenerative changes have been found [5].

A Matter of Interpretation
For me, it is difficult to conceive how a mechanical device could be considered the basis for understanding musculoskeletal-physiological systems in the body. Unfortunately, this error has become recognized as truth to some, and the historically common knowledge that the sacrum is suspended from the ilia by ligaments has been set aside by those who subscribe to the keystone model. However, their “ample evidence” is an assembly of misconceptions and omissions, sometimes tying legitimate findings to fabrications by misinterpretation.

Good research may be misleading with bad interpretation. For example, Vleeming et al. disagreed with established authors [5, 11-13] who, in comprehensive studies detailing the development of the SIJ from birth to old age, found degenerative changes that started in youth developed throughout life, resulting in tears, deep erosions, fibrotic changes, loose connective tissue strands, capsular thickening, and flaky, amorphous, yellow debris filling the joint space, which eventually form osteophytes and ankylosis. In contrast, the keystone proponents expressed their opinion that these same signs of degeneration were normal developments in early adulthood and then ignored, or minimized, the obviously pathological changes that developed throughout life, except in “certain older men”. To prove their point, they looked for associations that implied compression at the SIJs and used that implication to confirm their concept.

Vleeming et al [14, 15] set up an in vitro experiment showing that roughened SIJ surfaces had increased friction and claimed that this demonstrated that roughened surfaces were a normal response to weightbearing. Further, they claimed that the compression that caused the roughened surfaces was normal, which led them to believe that weight transfer through the SIJ was through the articular surfaces because that is where the coarseness occurs. In subsequent articles, they quoted themselves as affirmation of their hypotheses.

Unfortunately, the concept of form and force closure considers the SIJ to be unique, where energy (load) transfers through bone-to-bone compression at the articular area, which would eliminate the possibility of shock absorption in our core structure.

Ligamentous Suspension: Shock absorption in the SIJ
During nutation, axial force comes down through the spine, onto the sacral base, and forces the sacrum to move anterior and inferior as the ilium moves posterior and inferior; this countermovement winds the interosseous ligament and brings the ilia closer, but not together. At the bottom point of nutation, the SI ligaments absorb all the force and the joint springs back into counternutation. Because the ligaments suspend and pull the sacrum through its range of motion, movement is smooth, efficient and frictionless. But, when the force is greater than the ligaments can withstand, they sprain, resulting in aberrant sacral motion, as described above.

Conclusion
Since the keystone concept does not adequately address many essential well known principles such as the ligamento-muscular reflex, muscular compensation patterns, mechanisms of injury, the effects of lumbo-pelvic traction on a keystone, tensegrity, shock absorption, the propeller shape of the sacral articular surfaces, joint tension, SIJ motion about an oblique axis, and how the movement of our core interrelates with the rest of the musculoskeletal system, we are left with dead-ends, misinterpretations, and SIJ pain remains misunderstood.

For a biomechanical model to be accepted as valid, all known and verified biomechanical functions and associations must behave as predicted by the model. Clearly, there are too many discrepancies in the keystone concept of form and force closure for it to be recognized as valid.

I think that it is important to add that Vleeming and associates have contributed greatly to the education and promotion of the sacroiliac joint as a key factor in musculoskeletal dysfunction. Although their principles of form and force closure are inaccurate, they have stimulated research into biomechanics, which will lead to improved musculoskeletal care worldwide.