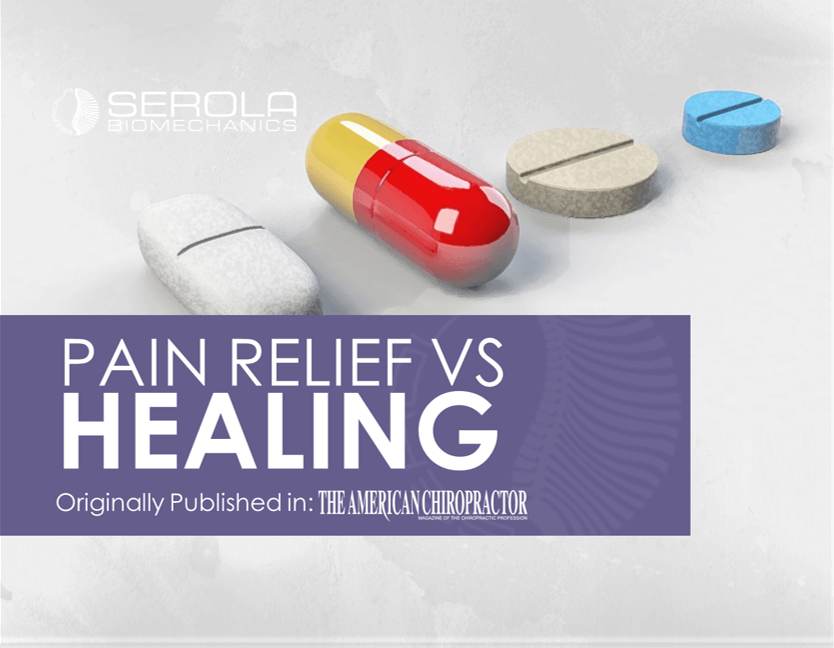 With joint injury, sprained ligaments initiate a complex chain reaction as the body compensates for the resulting hypermobility. To explain this better, we should consider that ligaments serve two main functions, proprioception and joint stability. Proprioception is a means of sensing the movement pattern of the joint, including direction, speed, and acceleration, and then balance the tension of the muscles to maintain even, smooth movement; this is an essential component of maintaining stability. In a normal joint, at the endpoints of range of motion (ROM), the ligaments not only physically stop movement in a particular direction, but they also induce the muscles to alter, or reverse movement patterns in concert with the opposite side; this is known as the arthrokinetic reflex.

With a ligament injury, the same muscular reflex pattern occurs, but the muscles are directed to alter their timing and tone, adjusting joint positioning and movement patterns to avoid putting stress on the injured ligament. The same muscles are tightened or inhibited, in the same pattern. The basic difference between a normal joint and an injured joint is that this pattern remains relatively static as long as the ligaments are injured; reciprocal movement is reduced, sometimes significantly. The name of the reflex changes to the protective ligamento-muscular reflex [1].

Hilton’s Law[2] infers that the muscles that attach to the bones that make up the joint are regulated by the ligaments within the joint, because they have the same innervation. When observing the sacroiliac joint, it is obvious that this directly involves almost every muscle from the head to the knees, meaning that the greatest bulk of our musculoskeletal system will become directly involved in a sacroiliac (SIJ) injury. The muscles that stabilize the SIJ will become tight and those that increase stress on the joint will become inhibited (lax). Both sets of muscles, either tight or lax, will not pump efficiently, leading to decreased blood flow. Eventually, the muscles will receive less nutrition, including oxygen, and will experience a buildup of metabolic toxins (metabolites), resulting in pain.

Most studies on pain follow the pain through the somatosensory pathway from the nociceptors and pain receptors in the ligaments to the spinal cord, synapse with interneurons, then travel through the spinothalamic track to the thalamus, and on to the cerebral cortex. Chemical interventions have been developed to reduce the feeling of pain, either by relaxing the muscle, or acting on the thalamus or other structures in the somatosensory pathway. But, the most sensible treatment is to stabilize the joint, thus relieving stress on the ligaments, which results in deactivating the ligamento-muscular reflex, and allows the muscles to pump efficiently, increase circulation, and flush out the noxious metabolites.

In some situations, medication may be needed for short term pain relief but, unfortunately, most doctors stop there. By getting rid of the pain, they think that the problem is solved. Unfortunately, the dysfunctional joint remains hypermobile and becomes a chronic source of pain.

In musculoskeletal injuries, where muscles are the main source of pain, it has been found that increasing circulation in the muscle appears to be the most natural means of pain relief. There are several approaches to this; massage, exercise, and stretching. Treatments can include everything from rubbing the muscle to stretching techniques, and a great variety of exercises aimed at balancing the muscles and realigning the joint toward its proper position. Each method has its benefits and drawbacks.

When a patient comes into our office with painfully tight muscles, e.g. iliopsoas, piriformis, etc., we think that we must stretch them. What we often don’t realize is that the muscle is tight for a reason, relieving stress on the ligament by pulling the joint surfaces toward each other. Because pain is due to decreased circulation in the tight muscle, stretching increases circulation and relieves most of the pain. But, as we stretch the muscles, the joint surfaces pull apart, which tends to bring the joint past normal ROM, and re-injure the ligaments.

Alternately, we see their antagonists, e.g. core muscles, such as the transverse abdominis and multifidus, as weak and flaccid, so we think we must strengthen them. With the SIJ, it has been found that strengthening the inhibited “core” muscles leads to a significant reduction in pain. But these muscles are inhibited for a reason; their action pulls the joint apart, increasing stress on the ligaments.

At first thought, both actions, stretching the tight muscles and strengthening the inhibited muscles seem to make sense and the results we get seem to confirm that. Because the ligamento-muscular reflex is relatively slow acting, if treatment is frequent enough, the muscles don’t have time to become painful between treatments, and it appears that the patient is getting better, with less pain and greater mobility. It is counterintuitive to think that these actions may worsen the patient’s condition, but that is what can happen, especially with sacroiliac injuries. By restressing the ligaments, the ligamento-muscular reflex will cause the muscles to tighten or become lax again. Our major mistake is considering reduced pain as a sign that the joint is more stable.

Further, knowing that the patient is going to become painful again, we give them exercises or stretches that reduce pain, but unknowingly re-injures them. Once they stop, the pain and stiffness returns. Their bodies feel the effect of a positive degenerative cycle that continues as they age: ligament injury – ligamento-muscular response – compensatory structural pattern – treatment reverses compensation pattern – joint goes beyond normal ROM – further ligament injury.

THE KEY TO PROPER TREATMENT

The key to proper treatment is to know where the stop point is to keep the joint within normal ROM. With most joints, it is fairly obvious but with the SIJ, it is difficult to tell the point of excess movement. In evaluating stretching and exercise plans over decades, I have not found one that even considers this issue with regards to the SIJ.

With joint injury, using contraction/inhibition patterning, the body tries to pull the joint away from injury. As a result, we often see the patient in a state of compensation, which appears to be the main injury. To realign the joint, we have to counter the body’s protective response; so we should stretch the tight muscles and strengthen the inhibited lax muscles. The counterintuitive part is knowing that we have to stop at the end of normal ROM, and how to do it. As we bring the joint back to its normal position, we must be careful not to go beyond normal ROM and re-injure the sprained ligaments.

HOW DOES THIS APPLY TO THE SIJ?

One key difference that separates the SIJ from other joints is that it has a separate, encapsulated portion, the syndesmosis, that functions to suspend the sacrum from the ilia, regulate muscles, and maintain normal ROM. But, when these weight bearing ligaments sprain, the joint separates slightly, the ligaments pull away from the joint surfaces [3], and the sacrum drops. Whenever a space opens in the body, even microscopically, fluid from the surrounding area fills the space and creates internal pressure, which stretches the ligaments. The ligaments activate a reflex that causes some muscles to tighten (counternutators) to try to pull the joint back together. Other muscles that would separate the joint (nutators) are inhibited. The balance between the internal pressure of the fluid, pushing out on the joint surfaces, is countered by the external muscular compression; this is the body’s attempt to create stability, as well as it can achieve it, unaided. But here is the key point: as long as the fluid remains in the syndesmosis, the ligaments cannot reach and re-insert into the joint surfaces, and the joint remains unstable, so healing cannot occur.

The SIJ injury is caused when excess axial or rotational force sprains the nutation limiting ligaments. The body responds by pulling away from the nutation injury into a state of counternutation. The patient suffers more from the compensation than the original lesion. In order to balance their structure, you must induce nutation to bring them away from their compensating pattern. The complication is that you have to bring them back toward nutation without going past normal range of motion, so movement should be gentle and specific until they have been stable long enough for the ligaments to heal. The key to treatment is simple. A good SI belt will help keep the joint within normal ROM but will not get all the fluid out of the joint space, so it will not heal the SIJ, although it does serve as a beneficial supplement to supine pelvic blocking (aka SOT® Category II). Supine pelvic blocking provides a method to gradually push the fluid out of the syndesmosis, align and compress the joint, and allow the ligaments to re-insert into the joint surfaces, while providing a stop point at the end of range of motion; it is the only way to heal the sacroiliac joint.

WHAT ABOUT THE CHIROPRACTIC ADJUSTMENT?

This is a great tool that can align the joint, remove stress from the ligaments, and significantly reduce pain and, for the most part, is more immediate than stretching or exercise alone. But, when the core (SIJ) is unstable, its effects are mostly temporary…more on that next time.