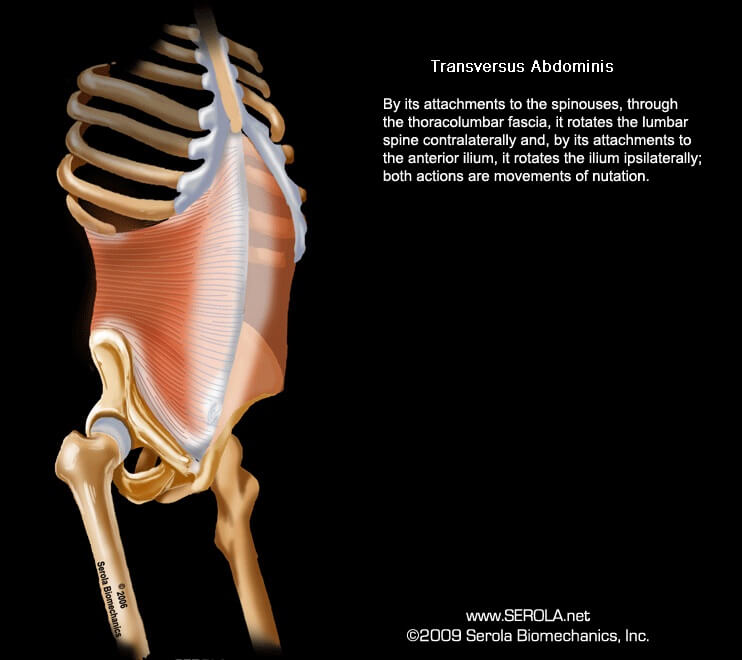 The transverse abdominis is active in both nutation and counternutation but primarily in nutation, where it increases the lumbar lordosis and pulls the ilia posteriorly.

Origin: costal cartilages of the lower 6 ribs, diaphragm, and the thoracolumbar fascia between the 12th rib and the iliac crest, anterior 2/3 of the iliac crest, lateral 1/3 of the inguinal ligament, and fascia over Iliacus muscle.
Insertion: pubic crest and posterior layer of the aponeurosis of the internal oblique.
Functions: [1]p31-39

The importance of the transversus abdominis as the primary muscle responsible for spinal stabilization can be seen through some of the following research studies.

Richardson et al.[1]p66-68discuss the above relationships and mention possible causes of the delayed response of the transversus abdominis and other abdominal muscles, including central nervous system influences, such as opposing muscle tightness, vestibular dysfunction, trunk muscle dysfunction, and reflex inhibition. Reflex inhibition has been linked to effusion, pain, ligament stretch, and capsular compression. Effusion, pain, and ligament stretch occur in the nutation lesion of the sacroiliac joint and capsular compression occurs when a sacroiliac belt is placed too tightly on an injured sacroiliac joint. Thus, it is reasonable that a sacroiliac nutation lesion may lead to a delayed response of the transversus abdominis and subsequent instability during arm or leg movement, including giving way.

In a normal, uninjured sacroiliac joint, Snijders [9], suggested that the transverse abdominis muscle can provide a force to enhance self-bracing of the sacroiliac joint. His statement refers to the fact that this muscle draws the joint surfaces towards each other, towards nutation, which is considered to be the position of stability. He does not take into account the effect of the muscle on a sacroiliac joint in which the ligaments that restrain nutation are sprained and the transverse abdominis pulls the joint towards the lesion; in this case, the transverse abdominis and other nutators will be inhibited, so the joint surfaces are not drawn together sufficiently to stabilize the SI joint; instead the counternutators surrounding muscles attempt to stabilize the SIJ by pulling it into counternutation.

Using Doppler imaging and vibration analysis, Richardson et al. [5] demonstrated that the transverse abdominis can act independently, and more effectively, from the rest of the trunk muscles to reduce laxity in the sacroiliac joint. As a nutation muscle, the transverse abdominis brings the sacrum and ilium closer together, enhancing stability, as long as the sacroiliac joint does not go past the normal range of motion.  The motion was prevented by means of isometric exercises monitored by an inflatable pressure valve [1] p146-155.

Tesh et al. [1]p56 [8] demonstrated that the thoracolumbar fascia, by approximating the spinous processes of the lumbar spine, produced an extension moment (nutation). Since both the transversus abdominis and multifidus tense the thoracolumbar fascia during expiration, their combined action can be considered to assist spinal stability in a normal joint. Conversely, when malfunctioning, as in the nutation lesion, the resulting inhibition of this muscle can hinder spinal stability.

Damen [10] noted that “Due to the anterior attachment of the transversus abdominis muscle to the iliac crest, this muscle is ideally placed to act on the ilia to produce, in combination with stiff dorsal sacroiliac ligaments, compression of the SIJs.” It is suggested here that, since compression of the sacroiliac joints occurs in nutation, it can be assumed that this muscle promotes nutation. Because the transverse abdominis uses the dorsal ligaments as levers and because the dorsal ligaments would already be sprained in a nutation lesion, the transversus abdominis would be inhibited to keep stress off of these ligaments.