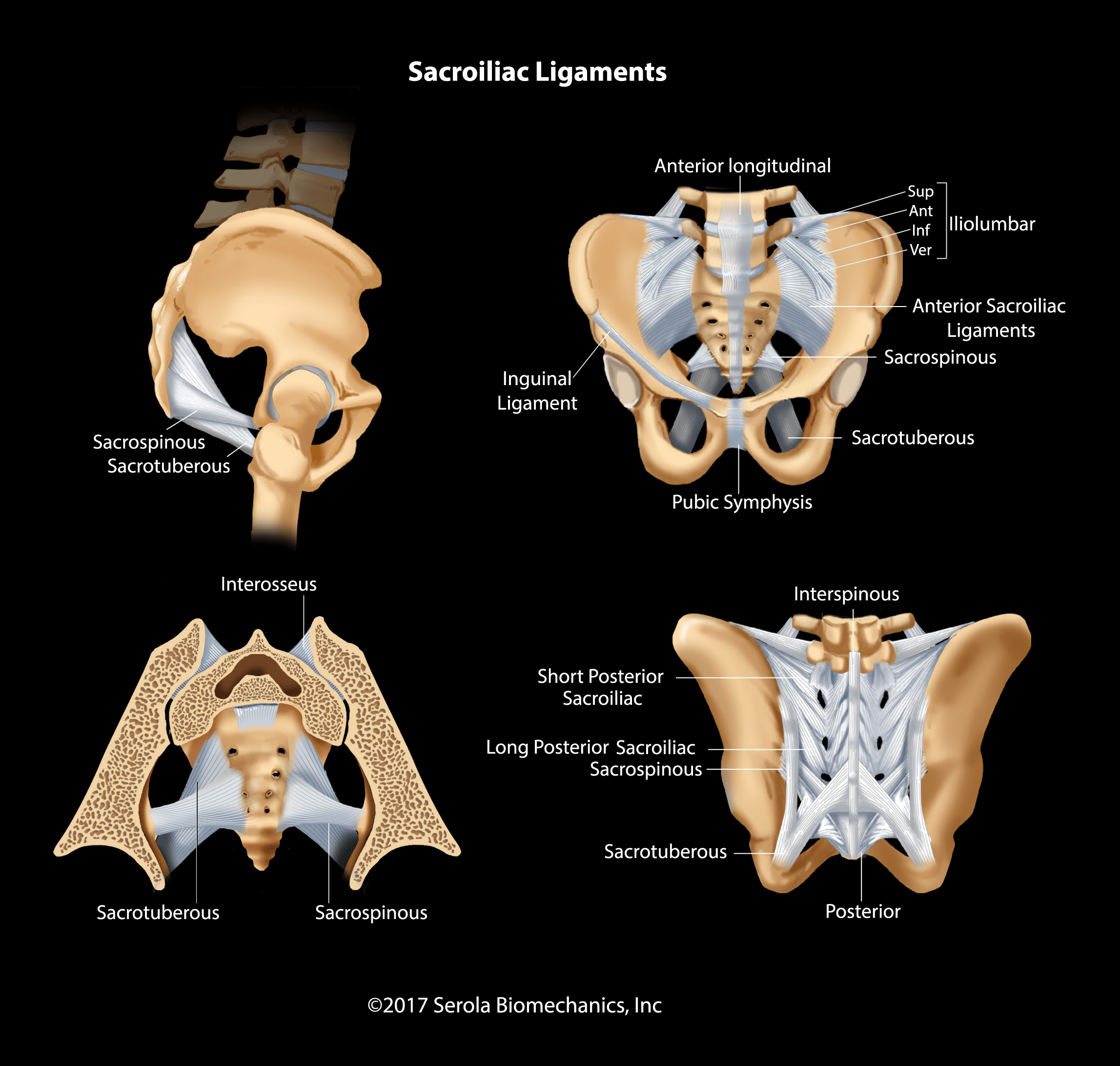 The sacroiliac joint has the strongest ligament system in the body. They are categorized according to their function of limiting nutation or counternutation.

The interosseous ligament plays a particularly important role. Vukicevic et al. found that, while removal of the sacrotuberous and/or sacrospinous ligaments did not significantly affect sacroiliac joint motion, removal of the interosseous ligaments had a profound effect. The ilia separated as the sacrum dropped at an angle and fixed between the two ilia. Movement was almost stopped. When the interosseous ligament is intact, its presence prevents tight contact between the articular surfaces of the sacrum and ilia, even when loaded [7]. The space between the ligamentous fibers are filled with nerves, soft areolar connective tissue, fat, elastic tissue, and blood and lymph vessels [6, 12, 14], thereby preventing bone-to-bone contact between the joint surfaces, as incorrectly espoused by promoters of the keystone concept.

LIMITING NEITHER NUTATION OR COUNTERNUTATION
Axial Sacroiliac Ligament:
The axial sacroiliac joint, situated about 15 mm posterior to the most concave point of the articular part of the SIJ, and anterior to the interosseous ligament, is described by Bakland & Hansen [21] and Bowen & Cassidy [22] as a possible pivot point of SIJ motion.

A great deal of research has been done to identify the center of sacroiliac joint motion, with conflicting results. Wilder, Pope, et al. [23], using surface topography techniques, reviewed the different axes of rotation proposed by Bonnaire, Farabeuf, and Weisl, and found a great deal of variation. They concluded that “The position of the axes of motion varies considerably between individual specimens.”

A brief explanation of the development of the SIJ may help explain why the axial sacroiliac joint appears to be correctly identified as the center of SIJ motion.

The axial sacroiliac joint, situated about 15 mm posterior to the most concave point of the articular part of the SIJ, and anterior to the interosseous ligament, is described by Bakland & Hansen [21] and Bowen & Cassidy [22] as a possible pivot point of SIJ motion.

Developmentally, until the late teens, the sacroiliac joint is smooth and flat such that a gliding motion can occur in all directions [22]. By the early twenties, the iliac surface develops a ridge running down the middle of the two wings. At the same time, the sacral surface develops a corresponding groove into which the iliac ridge glides. Following the development of this ridge and groove the sacroiliac joint appears to move in a linear fashion along this track. Soon afterwards, a bony tubercle, known as the axial sacroiliac joint, develops on the ilium, with a corresponding depression on the sacrum, just posterior to the articular portion of the sacroiliac joint. The fact that this joint develops soon after the ridge and groove supports the idea that it is associated with the SIJ’s movement. Bakland& Hansen[21], as well as Bowen & Cassidy [22, and Bechtel {Bechtel, 2001 #233] believe that this joint functions as the center of SIJ motion. Kapandji [1] also mentions that, according to the classical theory of Farabeuf, the axial joint was described as the center of motion of the SIJ.

Bakland & Hansen [21] found that, within the axial sacroiliac joint is the axial interosseous ligament (AIL), which, at 3.2cm2, makes up 14% of the total syndesmosis area and has its own capsule and synovial membrane. In agreement, Bechtel [24] measured it at 2.9cm2 but only in women, whose area would be expected to be slightly smaller. The remaining 86% of the syndesmosis is the sacroiliac interosseous ligament (SIL). However, where the SIL is one of the strongest ligaments in the body, the AIL is one of the weakest, as measured by failure load and failure stress, due to the low ratio of collagen and high ratio of connective tissue and blood vessels (only the ligamentum flavum is weaker). With this knowledge, Bechtel proposed that, since the AIL is at the center of motion of the SIJ, structural strength would not be needed since it does not function as a mechanical restraint; rather, it may serve a proprioceptive role.

So, while the ilia appear to rotate about the center of each acetabulum, the sacrum appears to pivot about the two axial sacroiliac joints simultaneously. As a pivot point, it would be the center of motion, like a fulcrum on a teeter-totter, but because the axial joint is non-weight bearing, the motion must be generated by a pulling action on either side of the fulcrum, rather than by compression. Other ligaments would prevent separation, whereas the axial ligament mainly, or only, provides proprioceptive feedback.

It appears that the sacrum, instead of rotating, pivots about one axial sacroiliac joint on each side in a rocking motion. For this pivoting to occur, there must be numerous attachment points to the ilium on each side, which pull the sacrum through its range of motion. It is evident that there are plenty of ligaments surrounding the axial sacroiliac joint, including the interosseous and capsular ligaments, to provide the necessary pulling action. For more, please see Facets Curl Around the Sacrum.