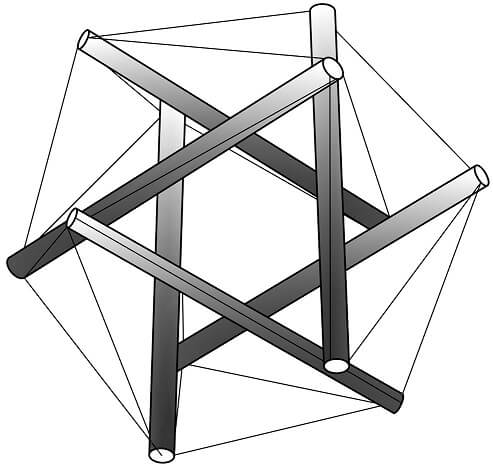 To understand ligamentous suspension, it is important to understand the interplay between soft tissues, such as the ligaments and muscles, and the body’s structural elements, the bones. This relationship is expressed through a principle called tensegrity (Tensional Integrity).

Tensegrity is thought to be the biomechanical basis of the structure of life forms, from carbon molecules to cells, to whole-body systems [1-3], and may even mediate the transduction of mechanical stresses into chemical responses by altering shapes of a cell’s surface receptors [4, 5]. Flemons [6] developed tensegrity structures which represent the torso, knee, foot, spine, intervertebral disc, pelvis, and skeleton.

Much of the leading research on the tensegrity of the cell has been done by Donald Ingber, a founding member of the Wyss Institute for Biologically Inspired Engineering at Harvard University. Another thought leader is Dr. Stephen Levin, who has written numerous articles describing biological tensegrity within the musculoskeletal system.

Tensegrity is based on a principle discovered by one of Buckminster Fuller’s students, Kenneth Snelson, who named it “floating compression”. It may be described as a triangulated structure composed of stick-like struts (compression elements) bound by cables (tension elements) in which the struts are not touching. The unit is pre-stressed by the cable portions and held in secure balance throughout its triangulated architecture. Simply put, it is composed of sticks suspended in a tight web in which the sticks are not touching each other.

The pre-stressed structure distributes tension throughout itself evenly, suspending the compression units in a web of tension such that stress applied at one point is distributed uniformly, and instantly, throughout the structure. There are no lever arms or fulcrums. Tensegrity has been described as continuous tension with discontinuous compression [7]. A tensegrity structure is strong, flexible, lightweight, energy-efficient, stable in any direction, and independent of gravity. It does not depend on the strength of individual elements for stability; instead, it gets its strength by distributing the stress evenly throughout the entire structure, even on opposite sides [1, 8].

Levin [8-10] applied the principles of tensegrity to the body and named it biotensegrity. He stated that the bones are compression elements floating in an integrated tension network of soft tissues, including ligaments, muscles, cartilage, and connective tissue.